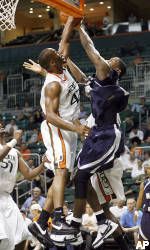 No. 22 Miami Cruises Past North Florida

“I thought it was our worst performance of the year,” Haith said. “Our intensity level was not good the whole game.

Jack McClinton and Dwayne Collins each scored 13 points to lead the 22nd-ranked Hurricanes, who were never threatened after scoring 11 straight points midway through the first half.

“My thing going into every game is rebounding as much as I can,” Collins said. “But we need to start stepping up and taking charges.”

Late in the first half, Miami built its first 20-point advantage and the Ospreys (1-9) never got any closer.

The Ospreys’ only consolation was outscoring the Hurricanes 40-39 in the second half.

“The way we played seemed like we weren’t ready but every guy tried to play hard,” said Miami guard Lance Hurdle, who finished with 11 points.

Miami has won its first 11 games, three shy of the Hurricanes’ previous best to start the 2001-02 season.

“Of course, we won the game but I thought we lost something tonight in terms of our performance, of getting better, which was our goal this week,” Haith said. “We have to get that back.”

Tom Hammonds scored 13 points for North Florida (1-9). For the Ospreys, in their third year of Division I play, it was their second consecutive defeat in a two-game South Florida trip after losing at Florida Atlantic 70-64 on Tuesday.

“It’s a difficult process we are going through,” North Florida coach Matt Kilcullen said. “But if you want to play with the big boys sometimes you have to get bumps early. Some learning experiences.”

James Dews’ 3-pointer with 5:48 remaining in the first half capped an 11-0 run, increasing Miami’s lead to 32-15. Brian Asbury also hit a 3-pointer and McClinton converted a three-point play during the run.

Despite missing their first five shots, the Hurricanes built a 16-5 advantage in the first 6:29. McClinton scored five points and Asbury hit a 3-pointer during the run.

But Chris Timberlake scored seven points as the Ospreys outscored Miami 9-4 in a 2:58 span and reduced the Hurricanes’ lead to 20-14 with 10:23 left.

“From that point on, it was mental breakdowns,” Kilcullen said. “For the first 10 minutes, we were in our game plan.”