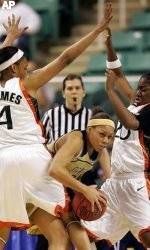 The University of Miami women’s basketball team will trek north to take on the Wisconsin-Milwaukee Panthers, in Milwaukee’s Klotsche Center, Wednesday night at 8:00 p.m. (ET).

Miami (2-3) lost to the Butler Bulldogs in the UM Thanksgiving Tournament this past Saturday after defeating Fordham in the opening round.

In the Fordham win, Lamese James had a great game off the bench as she scored 10 points and pulled down 12 rebounds for her second career double-double. For her efforts James was named to the all-tournament team along with fellow teammate Maurita Reid.

Reid leads the Hurricanes in both scoring and rebounds. Also stepping for UM was freshman Vitalija Vasciunaite who dropped 12 points on Fordham, all of her scoring came by way of the three-ball.

A Look at Wisconsin-Milwaukee
The Panthers from Wisconsin-Milwaukee are coming off a tough 55-56 loss at the hands of Dayton on two late free-throws. UW-M is led by Traci Edwards who is the only player that is averaging double figures in scoring with 21 points per contest. the Junior is also grabbing 10 rebounds per game for the Horizon League participants.

The Series
These two teams have met only one time previously, a year ago when the Hurricanes defeated the Panthers 78-71 in Coral Gables, Nov. 13.