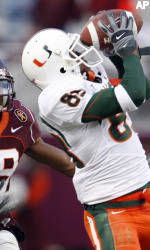 Miami Falls To No. 10 Virginia Tech

BLACKSBURG, Va. (AP) -Branden Ore hasn’t had the year he or Virginia Tech expected, but the Hokies tailback is hitting his stride at the right time.

Ore ran for two touchdowns, both times plowing over a Miami defender to get to the end zone, and No. 10 Virginia Tech beat Miami 44-14 on Saturday in the Hokies’ final tuneup for a huge game with rival Virginia next weekend.

“I just felt good out there and I was able to make the cuts and moves that I wanted to make,” Ore said after rushing for 81 yards on 15 carries. “The offensive line created holes for me. That made it a lot easier.”

Virginia Tech (9-2, 6-1 Atlantic Coast Conference) moved into a share of first place in the Coastal Division with Virginia. The teams will play on Saturday in Charlottesville with the winner moving on to the conference championship game Dec. 1.

Ore, who has not approached the form that produced nearly 1,400 yards rushing and 17 touchdowns last season, signaled that the nicks and pulls that have slowed him all season had finally subsided with a 22-yard run on the Hokies’ second offensive play.

He said the offensive line, finally healthy too, made it possible.

“You’ve just got guys in their right spots, in the right positions so they’re able to create more holes, and I just attacked the holes that they created,” he said.

Sean Glennon threw a touchdown pass to Justin Harper and Jahre Cheeseman and Carlton Weatherford had scoring runs for the Hokies. Weatherford’s was his first career touchdown and came on a day he and 19 other seniors were honored before the game.

Harper was among them, and followed his best game with probably his best catch, an over-the-shoulder, one-hand grab of Glennon’s pass in the right corner of the end zone.

“Offensively we feel like we’re hot and we’re rolling right now,” Harper said. “We’ve just got to carry it into every game. We’ve got to keep this thing rolling.”

Glennon was to share time with Tyrod Taylor at quarterback, but Taylor pulled a muscle in his left side on a scramble in the third quarter and Glennon got most of the snaps. Taylor could have returned, the school said.

Miami (5-6, 2-5), coming off a 48-0 home loss last weekend in its final game in the Orange Bowl, came out looking like a team that had given up. The ‘Canes went three-and-out on each of their first three possessions, trailed 17-0 after the first quarter and had been outgained 150-6 before Kyle Wright brought them out of their slumber.

Making passes repeatedly as he was getting hit, Wright drove Miami into Hokies territory three times in the second quarter, but got only one score out of it.

The first time, Wright was sacked and stripped of the ball by Barry Booker at the Tech 18. The next time, Virginia Tech stuffed consecutive runs from the 1 by Javarris James and took the ball over on downs.

On the third trip, Wright ran it in from the 4 himself 21 seconds before halftime.

“It seemed like it was too late before we realized we could play with them,” Wright said. “We fought our way back into it, and everybody was positive and ready to go.

“It’s frustrating when you fight back like that, move the ball up and down the field on every drive. It seemed like some guys were shocked that we were back in it.”

The Hurricanes scored on their first possession of the second half, with Wright hitting Leonard Hankerson with a 1-yard pass to make it 20-14. But the Hokies drove 68 yards in six plays, with Ore getting the last 38 on four runs, to answer with a touchdown of their own. It never got close again.

The game also marked the return of Hokies linebacker Vince Hall, who missed four games with a broken left forearm and wrist. Hall had a team-high 13 tackles.

“It got to the point where we just had to throw every time,” said James, who carried 10 times for seven yards. “They did a great job of getting pressure and that’s what hurts. Kyle’s jersey was too dirty tonight.”