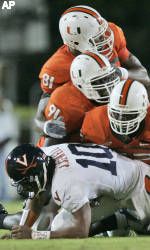 MIAMI (AP) — There were dozens of former star Miami players in attendance for the Orange Bowl’s farewell, including some wearing national championship and Super Bowl rings as No. 23 Virginia ended Miami’s 70-year stay at the famed stadium in stunningly one-sided fashion Saturday night.

Mikell Simpson had a pair of 1-yard touchdown runs and quarterback Jameel Sewell scored twice, as the Cavaliers posted a 48-0 victory.

Chris Cook had a 44-yard fumble return for a score with 2:26 left, putting Virginia’s effort into the Miami history books. It topped the 44-0 beating Notre Dame put on the Hurricanes at the Orange Bowl in 1973.

Sewell completed 20 of 25 passes and 288 yards for Virginia (9-2, 6-1 Atlantic Coast Conference), which led 31-0 at halftime, a margin that turned an already-sad night for some Hurricanes downright funeral.

Virginia did most of its damage with its trio of tight ends, who caught 10 passes for 154 yards.

Kyle Wright completed 9 of 21 passes for 94 yards for Miami (5-5, 2-4), which ended its Orange Bowl run on a three-game losing streak and needs a win at either Virginia Tech or Boston College over the next two weeks just to become bowl-eligible.