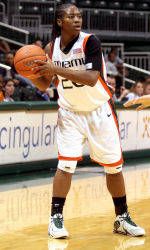 Sophomore Charmaine Clark added 11 points while senior Maurita Reid had 10 points. Miami shot 45.2 percent from the field connecting on 33-of-73 field goals. Thirteen different Hurricanes scored in the game. The Hurricanes made 14-of-18 free throws in the contest. Stacyanne Brown led DT3 with a game-high 17 points.

Sadler, who last played in a game for UM last December, helped UM build a 29-point halftime lead with eight first-half points. She finished 4-for-9 from the field. Senior center Carla Williams pulled down seven rebounds as Miami out-rebounded DT3, 55-41.

The Hurricanes led 46-17 at halftime behind the eight first-half points from Sadler. Reid and Williams each scored seven points in the half. UM built a 14-4 lead after Clark had a steal and Grimsley scored on a layup off on the fast break with 15:29 remaining in the first half.

UM used a 12-0 run to go ahead, 28-6, with 8:37 left in the half. Miami extended their lead to 40-10 after Reid scored seven points in a one-minute span. She nailed a three-pointer, made two free throws and added a fast-break layup.

Miami kept the pressure on DT3 in the second half as the team shot 48.5 percent including 60 percent from three-point range. The Hurricanes’ largest lead came after Clark hit a jumper with 19:19 to go to make it, 48-17.

DT3 cut their deficit to 54-35 with 11:02 left after former Hurricane Yalonda Moore knocked down a pair of three-pointers, but that was as close as DT3 would get.

Miami opens the regular season next Friday, Nov. 9, when UM hosts Florida Atlantic at noon at the BankUnited Center.