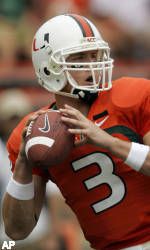 MIAMI (AP) -Tashard Choice ran for a career-high 204 yards on 37 carries, quarterback Taylor Bennett rushed for two touchdowns and Georgia Tech controlled the second half to beat Miami 17-14 on Saturday.

And this Georgia Tech win – just like the previous two – dealt the Hurricanes’ ACC hopes a serious blow.

Shawnbrey McNeal had a 39-yard touchdown run on a fourth-down play for Miami (4-3, 1-2 ACC), which came in allowing 111 rushing yards per game, but let Choice eclipse that by the midpoint of the third quarter.

The Yellow Jackets trailed 7-0 at halftime, and came out after intermission with a simple plan: Give Choice the ball.

Choice went 54 yards on Tech’s opening drive of the second half, and the Yellow Jackets pulled into a 7-7 tie when Bennett curled to his left and made a 10-yard sprint for the score.

Miami went three-and-out on its next possession, and Georgia Tech rode Choice again on its next drive, giving him the ball eight times on an eight-minute, 14-play, 77-yard grind capped by Bennett going in on another bootleg from 3 yards out.

The Hurricanes answered with a long drive to tie the game. McNeal came through again on fourth down – getting 6 yards on fourth-and-1 from the 15 – and Kyle Wright hit Sam Shields with a 4-yard scoring pass with 10:37 left in the game.

But after Bell’s field goal, the Hurricanes stalled. The drive could have started at the 25, but an unnecessary roughness penalty on Derron Thomas sent Miami back to the 13, and the Hurricanes managed only a couple yards before punting.

Miami never got the ball back, and was outgained 244-79 in the second half.

Miami cornerback Bruce Johnson got his first career interception with 6:32 left in the first quarter, wrestling what would have been a touchdown away from Georgia Tech’s Greg Smith in the right corner of the end zone – setting up the drive where McNeal scored the game’s first TD.

And the Yellow Jackets wasted another opportunity in the second quarter.

With about 7 1/2 minutes left before halftime, backup quarterback Josh Nesbitt darted through the left side of a 14-yard gain, which would have taken Georgia Tech to Miami 23. But left guard Matt Rhodes was flagged twice on that play, first for holding and then for unnecessary roughness. So instead of third-and-1, the Yellow Jackets were faced with second-and-38 and wound up punting.