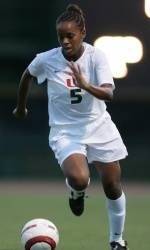 CORAL GABLES, Fla. – The 2007 University of Miami women’s soccer recruiting class is ranked 21st in nation in the annual poll by Soccer Buzz. It marks the third time that the Hurricanes have fielded a nationally-recognized signing class as the program embarks on just its 10th season.

Miami is one of seven ACC teams ranked among Soccer Buzz’ top recruiting classes – including four in the top 10, nearly doubling the contributions from the SEC and Big East, who added four ranked recruiting classes apiece. The ACC, arguably the strongest women’s soccer conference in the nation, sent seven teams to the 2006 NCAA Championship – where it collected 14 wins, advanced two teams to the semifinals and ultimately produced the national champion.

Miami’s 2007 class also ranks sixth in the southeast region – which includes perennial soccer powerhouses and fellow ACC members North Carolina and Florida State. While the `Canes consistently bring in recruiting classes ranked among the region’s top 20, it is the fifth top-10 regional ranking for Miami and the second top-10 appearance for a Hurricane recruiting class under head coach Tricia Taliaferro.

“My staff and I work very hard to attract high-caliber players,” said Coach Taliaferro. “The University of Miami offers the academics, competition and location to be attractive to any player in the country, and we are both excited and fortunate to have been able to sign the optimal talent for our program.

“Each season we continue to improve overall as a program, and we look forward to reaping the benefits of our hard work over the past year.”

The Hurricanes open the 2007 season with a pair of games in Oxford, Miss., including the August 31 opener versus Ole Miss.