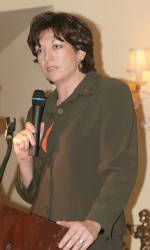 Coconut Grove, Fla. – The University of Miami women’s basketball team, staff and supporters gathered to celebrate the team’s accomplishments at the 2006-07 postseason banquet held at the Mayfair Hotel and Spa on Thursday evening.

Emceed by Jay Rokeach, the evening included video highlights of the team, as well as both seniors Amy Audibert and Renee Taylor, the recognition of staff members for their work throughout the year and an award presentation. Junior Maurita Reid came away with the most awards after being selected as the Strongest Player, Rebounding Leader, Most Intense Practice Player and Most Intense Player, while Audibert was the recipient of three awards – including the Academic and Coaches Awards. The 5-foot, 2-inch Taylor – who led the ACC in scoring with 18.6 points per game – was named team MVP.