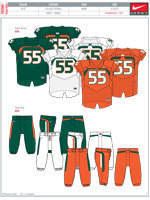 Hurricanes to Wear New Uniforms in 2007

Coral Gables, Fla. (www. hurricanesports.com) – – The University of Miami will unveil new uniforms for the 2007 football season, announced head coach Randy Shannon. The new uniforms, crafted by Nike, are similar to those worn for the past three seasons, with a couple of minor aesthetic changes, including different striping on the front and back and wider jersey numbers. The Hurricanes will also wear black shoes, but the traditional white helmet with the split U logo will remain unchanged.

The new uniforms will debut on September 1 when the Hurricanes host Marshall to kick off the 2007 season.

The new uniforms will continue to be made of a revolutionary, yet more durable lightweight stretch material that is form-fitting for performance enhancement. The material is moisture management capable, meaning it removes sweat and/or rain from the body and allows it to evaporate. Other goals set out by Nike with this particular design include improving ventilation and creating a distinctive visual look.

Replicas of the jersey tops will be available later in the summer for purchase online at www.hurricanesonlinestore.com .