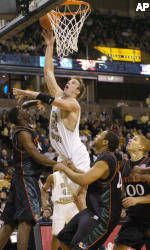 Wake Forest sent the Hurricanes into the league’s basement and reached .500 for the first time since late January.

The Hurricanes twice tied it in the second half, the final time on Brian Asbury’s three-point play which made it 52-52 with 7:30 to play, but Wake Forest wouldn’t let them take the lead.

Hale answered with 3-pointers on consecutive possessions 32 seconds apart from the left wing, with the second pushing the lead to 58-52.

After Miami cut it to 58-57 on a free throw by Keaton Copeland with 5 minutes remaining, the Demon Deacons scored 10 straight points, held the Hurricanes scoreless on five consecutive trips downcourt and pushed their lead back to double figures.

Asbury added 11 points and Anthony Harris had 10 for Miami, which rallied from a 10-point deficit early in the second half.

The Hurricanes used a 13-3 run to pull even at 38-38 on McClinton’s 3-pointer from the right corner with about 13 minutes left.

Wake Forest led by 10 in the first half after a 12-2 run in which the Demon Deacons held Miami to one field goal during an eight-minute span. They took a 29-19 lead on Weaver’s free throw with 1:40 left, and were up 29-22 at the break after shooting nearly 56 percent in the half.

Demon Deacons guard Michael Drum, whose game-winning putback earlier in the week beat Clemson, bruised his knee during a charge midway through the first half and did not return.