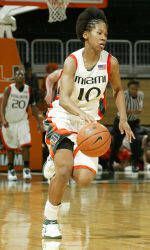 Maurita Reid (Queens, N.Y.) helped the Hurricanes (11-14, 2-8 ACC) score 25 points off turnovers, grabbing a career-high 10 steals to tie UM’s single-game record with Maria Rivera (12/22/86 vs. Minnesota) and Pat Bentoski (2/3/80 vs. Stetson). In addition, that performance is tops in the ACC this season and ties four others as the fourth-most steals in an NCAA Division I game this season.

Reid, the league’s leader with 3.9 steals per game versus ACC opponents, finished with her second-straight double-double and fourth of the season with 18 points and 10 steals, and also flirted with her first triple-double, grabbing six rebounds.

Sophomore LaToya Cunningham (Vallejo, Calif.) came off the bench to record her first double-double of 10 points and a career-high 10 boards, while dishing out a team-high five assists.

Reid hit three early three-pointers and grabbed a career-high seven steals in the first half to help the Hurricanes take control and lead by as many as 11 points in the opening minutes. Miami then used a 12-4 run, including a pair of baskets from both senior Renee Taylor (Harlem, N.Y.) and freshman Charmaine Clark (Hinesville, Ga.), to close the opening half with the 39-24 advantage. The 15-point margin marked the `Canes’ largest halftime lead versus an ACC opponent this season.

Miami came out focused after the break, and continued its solid play on both sides of the ball. The Hurricanes shot 60 percent in the second half and outscored the Demon Deacons 27-7 over an eight-minute stretch to extend their lead to 24 points with 5:18 remaining.

In a game that pitted the ACC’s top-two scorers in UM’s Taylor and Wake Forest’s Yolanda Lavender, the Hurricanes kept the Demon Deacons to 33.9 percent shooting and held Lavender scoreless for the first time this season.

Taylor finished with 16 points for her sixth-straight double-figure scoring performance, and added four steals to Miami’s 16 total. Clark had her fourth double-figure scoring performance of the season with 13 points, while junior Albrey Grimsley (Ft. Pierce, Fla.), who had the daunting task of guarding Lavender, added 10 points for the Hurricanes.

The University of Miami women’s basketball team returns to action in front of a national television audience on Sunday, February 11, as they travel to Boston College for a 5:30 p.m. tilt on ESPN2.