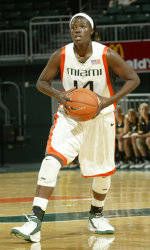 Coral Gables, Fla. – Five Clemson players scored in double figures as the University of Miami women’s basketball team dropped its second-straight game, falling to the Tigers, 79-69, at the BankUnited Center on Sunday afternoon.

Miami’s Renee Taylor (Harlem, N.Y.) and Maurita Reid (Queens, N.Y.) combined to hit six three-pointers in the opening six minutes, as the Hurricanes charged out to a 23-14 lead. However, Clemson answered with a trey of its own from Susan Yenser, and Miami would not hit another three-pointer for the remainder of the game.

Reid ran into early foul trouble – getting called for two quick fouls within 40 seconds – and the Hurricanes’ second-leading scorer had to sit for much of the period. For Clemson, Whitehurst was called into the game and would go on to hit four-straight three-pointers, as the Tigers closed the half on a 12-2 run to take the 46-44 lead into halftime.

Despite hitting 48.5 percent from the field in the opening stanza, the Hurricanes struggled to find their shot in the second half, connecting on just five field goals (25 percent). Clemson took advantage of this, putting together several scoring drives and led by as many as 15 points. Miami was effective from the line, hitting 15 of 18 free throws in the half, but it wasn’t enough as the Hurricanes fell to the Tigers, dropping to 1-6 in ACC play.

Tasha Taylor added 14 points for Clemson, while Moreemi Davis finished with a double-double of 11 points and 10 rebounds.

The University of Miami women’s basketball team returns to ACC play at home at the BankUnited Center on Thursday, February 1, versus Florida State (16-5, 5-1 ACC) at 7 p.m. The two teams met earlier this month in conference action in Tallahassee, with the Seminoles coming out on top, 71-62.

Thursday’s game has been designated Women’s Basketball Employee Day. All employees may receive one complimentary ticket to the game and may purchase up to five additional tickets for family members for $1 each. A ticket registration form must be filled out in advance, which can be downloaded here.