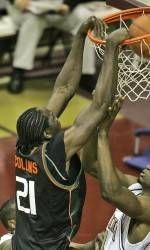 The Seminoles, who came into the game as one of four ACC teams with just one league victory, shot 50.9 percent and were 13 of 23 from 3-point range.

Rich sparked an early run that put the Seminoles up by a dozen midway through the first half and the game was never close afterward. Florida State, which led by 33 late in the game, built its lead to 60-36 early in the second half and upped it to 69-39 on Jerel Allen’s layup with 10:59 left.

Florida State (14-5, 2-3 Atlantic Coast Conference) led 47-28 at the half, benefiting mostly from deadly outside shooting — hitting 9 of 13 from 3-point distance.

The Seminoles hit 7 of their first 10 tries from long distance while building a 25-13 lead midway through the opening half. Two of Rich’s 3-point shots, just 28 seconds apart, started an 18-5 Seminole run that opened the early 12-point lead.

Miami, meanwhile, was cold from the floor — shooting just 35.5 percent and only 30.8 percent in the first half.

The Hurricanes (9-11, 2-4) were led by Denis Clemente’s 15 points. Anthony Harris, Brian Asbury and Dwayne Collins all contributed a dozen.

Thornton, who was held without a point or rebound in last year’s home loss to the Hurricanes hit 6 of his 10 shots and was one of four Seminoles with four rebounds.

At the half, Florida State retired the uniform jersey of former player and coach Hugh Durham, whose 1972 Seminoles finished as the 1972 NCAA runner-up to UCLA. He joins former player Dave Cowens as the lone Seminoles whose jerseys hang in the rafters.