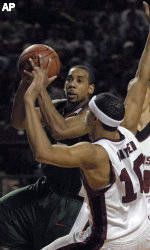 Free throws by Dwayne Collins and Brian Asbury in the final minute proved the clinchers for Miami. UMass’ Gary Forbes hit a 3-pointer at buzzer.

Harris was 13-for-19 from the field, including four 3-pointers. Denis Clemente added 11 points for Miami.

Rashaun Freeman and Forbes had 16 points apiece and Life added 14 points for UMass. Freeman led both teams with 10 rebounds.

Stephane Lasme had 10 points and blocked seven shots for UMass.

The Minutemen led 34-32 at halftime. A 14-2 run early in the first half gave UMass its first lead. Freeman had seven points in the spurt.

Miami went back on top briefly at 30-29 on a 3-point basket by Clemente, but Etienne Brower retaliated with a hoop and UMass stayed on top for the rest of the half.