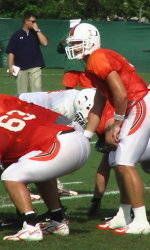 Hurricanes Go Through Fourth Practice Prior to MPC Computers Bowl

Coral Gables – The Miami Hurricanes returned to the practice field for the fourth of six on-field practices before they break for Christmas.

The team practiced in full pads. “This was a work day for us,” said head coach Larry Coker. “We have to get our work done here, then we’ll get to the bowl site, where things are more hectic because of the schedule. There we’ll repeat what we have done and then finish the product before the bowl game.”

For the day at least, the Hurricanes were without the services of offensive line coach Mario Cristobal, who was named the head coach at Florida International University earlier in the day. “I’d like to see him coach the bowl game, but it’s up to him and FIU,” Coker said. “It would be good for us and good publicity for FIU.”

For today’s practice, Coker, quarterbacks coach Todd Berry and graduate assistant Mike Cassano coached the offensive line. “The linemen will be fine – I don’t think we’ll screw them up in 10 days,” Coker quipped.

Coker said that Willie Cooper, who received an award as the team’s top special teams players last night, has a sprained ankle but that he’ll be fine for the bowl game. “He’ll be ready to practice by the time we get to Boise,” Coker said.

The Hurricanes will practice again at 2:00 Wednesday and then finish up at 9:30 a.m. Thursday before taking off for the holidays.