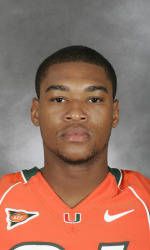 The Piccolo Award has been given annually since 1972 in memory of the late Brian Piccolo to the “most courageous” football player in the ACC. Piccolo was the ACC Athlete of the Year in 1965 and played for the Chicago Bears before his career was cut short when he was stricken with cancer. His courageous fight against that disease was an inspiration to the Bears and the entire football community.

After missing all but two games in 2004 and 2005 due to injuries, Sharpe, a 6-0, 187-pound cornerback returned to the field this fall and started in all 12 regular season games for the Hurricanes. The Miami, Fla., junior has 29 tackles and two interceptions. In addition, Sharpe is tied for second in the ACC with 15 passes defended.

Prior to the start of the 2005 season, Sharpe tore the anterior cruciate ligament (ACL) in his right knee and underwent surgery to reconstruct the ligament and repair the meniscal tear. The torn ACL was his second in as many years, having endured the same injury to his left knee in the ninth game of the 2003 season against Tennessee. After a long rehabilitation process following surgery, Sharpe was participating in limited drills by the 2006 spring football practice.

“We are very proud of Glenn Sharpe and his efforts to come back and be an integral part of our football team,” said Miami head coach Larry Coker. “Glenn is a tremendous competitor and a tremendous talent.”