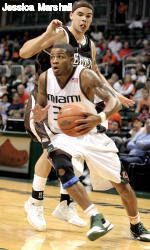 It was the sixth straight game that McClinton has scored at least 20 points and currently leads the Atlantic Coast Conference in scoring. He was 7-of-14 from the floor and 4-of-4 from the free-throw line.

Miami (6-3) trailed by as many as 11 in the first half, but fought back to take a 36-33 lead into halftime and never trailed in the second half.

The Hurricanes also got a strong performance from Brian Asbury, who scored 18 points and made five 3-pointers. Raymond Hicks made his first start of the season for Miami, in place of injured center Anthony King, and scored 13 points.

Even without King, who was averaging 9.3 rebounds a game, Miami still out-rebounded Lehigh 33-23. Dwayne Collins had a game-high seven rebounds.

Denis Clemente came off the bench for Miami to dish out a career-high nine assists in 28 minutes.