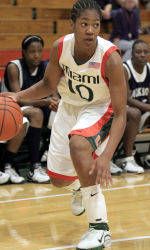 CORAL GABLES, Fla. – Miami fittingly scored 77 points while holding Jackson State to 50 to upend the Tigers Friday night in a special “Throwback to the 70’s” game held at the Knight Sports Complex which served as the home of UM women’s basketball from 1985-2002.

Behind a 15-0 run to start the second half, Miami, who is off to its second-consecutive and just the sixth 7-1 start in the school’s 35-year history, outscored the Tigers (4-2) 39-18 in the second half to give head coach Katie Meier her 100th-career victory.

In a first half that would feature seven lead changes, Jackson State kept things close before taking a five-point, 30-25 lead on a basket by LaSheree Christian with 4:53 remaining in the half.

A little under two minutes later, UM junior guard Albrey Grimsley brought Miami back within two with a three-pointer.

Clark tied the game at 30-all with a jumpshot that eventually became part of a 12-2 Hurricane run to close out the half with UM up 38-32.

Miami carried the late first-half momentum into the second, holding the Tigers scoreless for the first six minutes and fifty-five seconds while rattling off 15-straight points which lead to a 23-0 run extending back into the first half.

Sadler led the Hurricanes with nine rebounds off the bench and sophomore guard LaToya Cunningham recorded a game-high six assists.

Miami will head to Ann Arbor, Mich. Sunday to take on Big Ten opponent Michigan in a regionally televised game on ComCast Sports (Michigan area only) at 2 p.m. (EST).