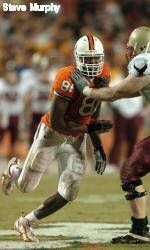 For the season, Olsen led the team in receiving with 38 catches for 444 yards (11.7-yard average) and one touchdown. Campbell tied for the conference lead with 10 sacks, which tied for 10th place on the school’s single-season sack list. He also had 20 tackles for loss.