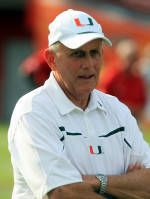 Coker Released from His Contract as Hurricanes Head Coach

“The University has made a decision to change head coaches for our football program,” said athletic director Paul Dee. “We all recognize Larry’s contributions to this program and all he has accomplished in his six years and in prior years as the offensive coordinator. On behalf of the university I want to thank him for what he’s done for us.”

Coker spoke at a press conference, saying, “I want to encourage our alumni, fans, our NFL alumni, to be stronger than ever for supporting this program, supporting the new coach, the new staff. The University of Miami has a great reputation. It’s going to be a good job. This football program will not be down long.”

Dee announced that the university will engage Chuck Neinas, the former commissioner of the Big Eight Conference and former executive director of the College Football Association, to assist in the coaching search.

In a statement to the community, President Donna E. Shalala said, “We need a new start. We will recruit a great coach. We are looking for an experienced and successful coach of the highest integrity who understands and loves the Miami tradition of success and football family. He must be a great recruiter, of high character, committed to winning championships, academic success, and to the University community. We want someone who wants to be at the University of Miami, who is well organized, inspirational, and can attract a first-rate staff.”

Shalala has directed Vice President for Advancement and Communication Sergio M. Gonzalez to begin a six-month fundraising sprint to secure commitments from supporters/donors to finance competitive coaching contracts and build and renovate first-class facilities and programs for the coaches and student-athletes.

Coker was named the school’s 19th head football coach on February 3, 2001, marking the first time in 25 years that the University of Miami looked to one of its own when finding a football coach. That year, Coker not only took the Hurricanes all the way to an undefeated season and a national championship, becoming the first rookie head coach in 53 years (and only the second ever) to lead a team to the title he led the team to the most dominant season in Miami’s rich football history. He was also the first coach since Walter Camp (1888-89) to go undefeated through his first 24 games as a head coach. He was the winner of the 2001 Paul “Bear” Bryant Coach of the Year Award

His 2002 team went unbeaten until a controversial and dramatic loss in the Fiesta Bowl. Coker’s 2003 Hurricanes racked up a fourth straight Big East Conference crown and became college football’s first team to make appearances in all four BCS bowl games in successive years.

Coker fared successfully on the academic side of coaching. This year’s football team has eight players who have already graduated and nine more who will graduate next month. The 2005 team graduated all 21 players, a total higher than any other college in the country. The Hurricanes’ 2004 graduation rate was 84 percent, far higher than the national average of 58 percent.

Coker had a 59-15 record in six seasons as the Hurricanes’ head coach, the third most in school history behind Andy Gustafson 93) and Dennis Erickson (63).