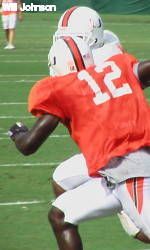 The Miami Hurricanes participated in their tradition of carrying off their seniors following their final regular-season practice of the year on Tuesday afternoon at the Greentree Practice Fields.

While Tuesday was the final practice at UM for 11 seniors, a Thanksgiving Night matchup against No. 18 Boston College will be their last game at the Orange Bowl and their last shot at playing in a bowl game this season.

“This is senior night for us and it’s for the seniors,” head coach Larry Coker said. “When the bell rings you respond, and we’re going to go out there and do the very best that we can.”

The short turnaround from Saturday to Thursday does not work in Miami’s favor considering the plethora of injuries that has beset the team, especially at linebacker. Fortunately, junior Tavares Gooden is expected to return and play as the strongside linebacker on Thursday.

Thursday’s game means that the Hurricanes won’t be able to fill up on turkey and stuffing like the majority of the country on Thanksgiving.

“For Thanksgiving, we are going to change our Wednesday night meal,” Coker said. “We’ll have a little turkey and some of those things. Thanksgiving Day will be a normal day for us. Hopefully we’ll have enough free time on Friday and Saturday to spend time with family and eat leftovers.”