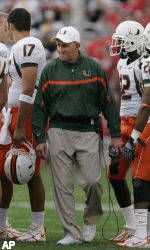 TV: The game will be broadcast nationally on ESPN, with Chris Fowler (play by play),Kirk Herbstreit and Doug Flutie (analysis), and Erin Andrews (field reporter).

THIS WEEK’S GAME: The Miami Hurricanes will close out their regular season when they host theBoston College Eagles at 7:30 p.m. in the Orange Bowl. The Hurricanes need to win the nationally televisedgame on Thanksgiving night to earn a berth in a bowl game for the ninth consecutive season.Miami has lost its last four games and is now 5-6, hoping to avoid its first losing season in nine yearsand only the second in ther last 27 years. Kirby Freeman will make his third straight start at quarterbackand attempt to even the Hurricanes’ record at 6-6. The Hurricanes are 2-5 in the ACC.

Last Saturday, the Hurricanes were defeated by Virginia on the road 17-7. Freeman connected withLance Leggett on a 77-yard touchdown pass, but otherwise the Hurricanes struggled on offense, gainingonly 263 yards and 11 first downs.

The Miami defense remains one of the best in the country and has allowed more than 17 points injust two games. Through 11 games, Miami ranks eighth in the country in total defense and fourth in rundefense. Defensive end Calais Campbell leads the defense with 16 tackles for a loss and nine sacks.

THE OPPONENT: Boston College is 9-2 this season and is still in the hunt for the ACC Atlantic Divisiontitle and a berth in the ACC Championship game. The Eagles are coming off a 38-16 victory overMaryland and have lost only to North Carolina State and Wake Forest this year. Quarterback Matt Ryanleads the Eagles’ attack. He has passed for 2,531 yards and 14 touchdowns this season. Tailbacks L.V.Whitworth and Andre Callendar have combined for 1,305 yards rushing so far. On defense, BostonCollege ranks 38th in total defense but 15th in scoring defense.

THE SERIES: This will be the first meeting between the two schools as Atlantic Coast Conferencemembers. In the series that dates to 1955, Miami has won 22 of 25 games and has not lost since 1984in the “Hail Flutie” game. In 12 years in the Big East, Miami was 11-0 against Boston College.

A HURRICANES VICTORY OVER THE EAGLES WOULD: End a four-game losing streak and givethem a 6-6 record for the season and make them bowl eligible for the ninth consecutive season. It wouldgive them a 3-5 record in the ACC Coastal Division and a 23-3 record in the series against BostonCollege.