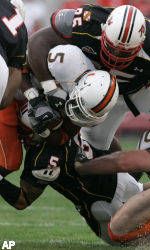 Miami Travels To Virginia On Saturday

TV: The game will be broadcast on Raycom/Lincoln Financial Sports, with SteveMartin(play by play), Rick Walker (analysis) and Mike Hogewood (field reporter). It willbe telvised on WFOR Ch. 4 in Miami, on WTVX Ch. 34 in West Palm Beach and WINK Ch. 11 in Ft.Myers.

THIS WEEK’S GAME: The Miami Hurricanes will attempt to end a three-game losing streak when theytravel to Charlottesville, Va. to meet the Virginia Cavaliers at 12:00 noon Saturday at David A. HarrisonField at Scott Stadium. The game will be regionally telecast by Raycom/Lincoln Financial. This will beMiami’s final road game of the regular season.

The Hurricanes are still grieving over the loss of their teammate Bryan Pata, and the players willattend a funeral and an on-campus memorial in the days leading up to the game. Last Saturday, playingjust four days after Pata was shot and killed near his off-campus apartment, the Hurricanes put fortha valiant effort at Maryland, losing 14-13. They are 5-5 this season and still need one more victory tobecome bowl-eligible for the ninth consecutive year.

If there has been any certainty about the Hurricanes this season, it’s that their defense is once againone of the best in the country. Through 10 games, Miami ranks fifth in the country in total defense andthird in run defense. Playing without Pata against Maryland, the Hurricanes held the Terrapins to onlysix first downs and 258 total yards. Two long touchdown passes netted Maryland 161 of those yards(65 and 96-yarders), meaning Maryland had just 97 yards over the rest of the game (only 53 in the secondhald and six in the fourth quarter). One week earlier, Miami held Virginia Tech to only 139 yards onoffense.

Miami has a new starting quarterback in Kirby Freeman, because Kyle Wright is out with a brokenthumb. Making the first start of his career, Freeman showed lots of promise, completing 14 of 27 passesfor 140 yards and a touchdown and rushing for 51 yards on nine carries. Behind Freeman, theHurricanes offense netted 18 first downs, converting 13 of 21 third downs, and they controlled the ballfor 37:09.The Hurricanes are 2-4 in the ACC. Following the Virginia game, Miami will return home to hostBoston College in the Orange Bowl on Thanksgiving night.

THE OPPONENT: Virginia is 4-6 this season and is coming off their bye week. In their last outing onNovember 4, the Cavaliers were shut out by Florida State 33-0. That snapped a two-game winningstreak that included a shutout of North Carolina and a win over North Carolina State. Virginia is led byrunning back Jason Snelling, who has 694 yards rushing and seven touchdowns. They are quarterbackedby freshman Jameel Sewell, who has completed 110 of 193 passes (57.0 percent) for 1,059yards, five touchdowns and five interceptions. Virginia also has a stout defense that is ranked 21st inthe nation (37th vs. the run and 28th vs. the pass and 32nd in scoring).

THE SERIES: The two teams have played only three times, with Miami winning every game. The twoschools met for the first time in the 1996 Carquest Bowl, a 31-21 Miami win. They played each of thelast two years since Miami joined the ACC. In 2004, the Hurricanes won 31-21 at Charlottesville, andlast season Miami won 25-17 in the Orange Bowl.

A HURRICANES VICTORY OVER THE CAVALIERS WOULD: End a three-game losing streak andgive them a 6-5 record for the season and make them bowl eligible for the ninth consecutive season. Itwould give them a 3-4 record in the ACC Coastal Division and a 4-0 record in the series against Virginia.