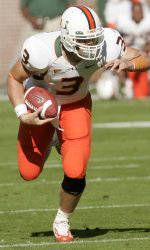 Hurricanes Look To Rebound Against Hokies

TV: The game will be broadcast live on ABC with Mark Jones (play by play), DavidNorrie (analyst) and Stacey Dales (field reporter).

National Radio: Westwood One will broadcast the game live with Kevin Kugler (play by play) and TerryBowden (analyst).

THIS WEEK’S GAME: The Miami Hurricanes return home to host the Virginia Tech Hokies at 8:00 p.m.Saturday in the Orange Bowl. The game will be regionally televised by ABC.

The Hurricanes are 5-3 this season after losing at Georgia Tech last Saturday. The Hokies are 6-2 afterdefeating Clemson on Thursday night. The Hurricanes still have a lot to play for this season, with an outsideshot at a berth in the ACC Championship game still a possibility. And certainly an invite to their eighth consecutivebowl game looms at the end of the season. But to do so, the Hiuricanes will have to defeat an ACCrival with a winning record. Following Virginia Tech comes road trips to 6-2 Maryland and 4-5 Virginia beforethe season finale against 7-1 Boston College on Thanksgiving night in the Orange Bowl. Miami is 2-2 in theACC. Virginia Tech improved to 6-2 (3-2 in the ACC) with their 24-7 victory over Clemson. The Hokies areranked 24th in the Coaches poll and 23rd in the Associated Press poll. They are led by running back BrandonOre, who ran for 203 yards against Clemson and now has 939 yards and 12 touchdowns for the season.

THE SERIES: The two teams have played 23 times, with Miami leading the series 16-7. In the lastmeeting, Miami defeated Virginia Tech 27-7 in Blacksburg, Va. on November 5, 2005.

A HURRICANES VICTORY OVER THE HOKIES WOULD: Give them a 6-3 record. It would give thema 3-2 record in the ACC Coastal Division and it would also give them a 17-7 record in the series againstVirginia Tech.