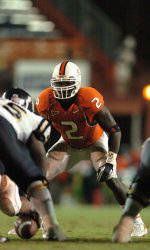 Hurricanes Get An Unexpected Boost At Practice

CORAL GABLES, Fla. – The Miami Hurricanes got a lift in the final practice of the week on Thursday afternoon at the Greentree Practice Fields. Junior linebacker Jon Beason will be available to play Saturday at Georgia Tech, head coach Larry Coker told reporters after practice.

“Jon Beason did practice today and he is coming along fast,” Coker said. “He looked like he hadn’t missed a beat.”

Beason was expected to miss up to three weeks following a knee injury he sustained against Florida International on Oct. 14. The news is encouraging considering fellow starting linebacker Romeo Davis went down with an injury last week against Duke.

Although Beason isn’t likely to start, his value isn’t solely contained in his play on the field, Coker said. “It helps a lot because Beason brings a lot of energy to the team and a lot of leadership,” Coker said. “He’s a football player. Having him there and being available means a lot to us. It will make me sleep better tonight.”

Miami will conduct a final walk-through at the Greentree Practice Fields on Friday morning prior to departing for Atlanta at 1:15 p.m.

Notes: Wide receiver Ryan Moore will not travel to Georgia Tech but is expected to be available against Virginia Tech on Nov. 4, Coker said… Baraka Atkins will remain the starting defensive end, but with Eric Moncur waiting in the wings, Coker said he feels like he has two starters at left defensive end.