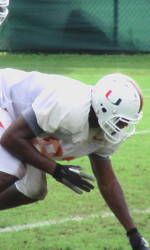 Hurricanes And Yellow Jackets Will Lay It On The Line Saturday

CORAL GABLES, Fla. – The final five games of the Miami football season each will play a pivotal role in how the Hurricanes spend their postseason, beginning with this weekend’s game at Georgia Tech. UM’s focus was evident in Tuesday’s afternoon practice at the Greentree Practice Fields.

“I think the guys know what’s at stake,” head coach Larry Coker said. “They know how we have to play to have an opportunity to win this football game.”

What’s at stake is first place in the ACC Coastal Division and the inside track to the ACC Championship Game in Jacksonville on Dec. 2. The Hurricanes (5-2, 1-1 ACC Coastal) and No. 21 Yellow Jackets (5-2, 2-1 ACC Coastal) most likely will not be in the national title hunt. But each still has a shot at an ACC title and Bowl Championship Series game.

“We are still in position to be where we want to be,” Coker said. “Now we have to take advantage of that. You go to Atlanta and I’m sure (Georgia Tech head coach) Chan Gailey is telling his guys `Look where we are.'”

The Hurricanes should receive a boost from the 12 players who are back from suspension, as well as from tight end Greg Olsen, who sat out the Duke game as a precautionary measure following a concussion he suffered on Oct. 14. “Olsen could have played last Saturday, but we felt like it was in our best interest and his best interest to hold him out,” Coker said.

Miami will practice again at 3:20 p.m. Wednesday at the Greentree Practice Fields.