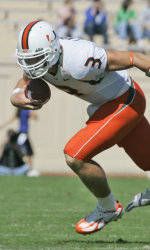 Kyle Wright had two touchdown passes to Sam Shields for the Hurricanes (5-2, 2-1 Atlantic Coast Conference), who nearly blew an 18-point lead and were without 13 players suspended for taking part in last week’s nasty brawl with Florida International.

Winless Duke (0-7, 0-5) had 380 total yards to Miami’s 329 and nearly pulled off the huge upset after rallying from a 20-2 deficit with two touchdowns in the fourth quarter – an 11-yard touchdown pass from Lewis to Raphael Chestnut, and a 7-yard TD run by Re’quan Boyette.

Duke had two chances in the final 5 minutes to win it. The first attempt failed when Lewis’ fourth-down pass to Jomar Wright was juggled near the 20 and dropped with 3:39 remaining.

The Blue Devils got it back with 1:35 to play and used two long Lewis-to-Jomar Wright passes and a pass interference penalty on Miami to move to the Hurricanes 6 with 3 seconds remaining.

Lewis threw toward the end zone to Wright, but Cooper picked off the pass and returned it to the Duke 15, where he fell down to seal the Hurricanes’ fourth straight victory.

Lewis finished 21-of-40 for 284 yards and a touchdown, but he was intercepted four times – a Miami-record three by Kenny Phillips – in Duke’s 15th consecutive loss. Jomar Wright had 10 catches for a career-high 176 yards.

Jon Peattie had field goals of 21 and 50 yards for Miami, which was in control for most of the first half. The Hurricanes led 17-0 at halftime before Duke scored on a safety on Miami’s opening series of the third quarter when a fourth-down snap sailed over punter Darren Daly’s head and he kicked the ball through the back of the end zone.

Duke, which has one of the worst total defenses in the ACC, held Miami to 30 yards rushing on 26 carries.

Twelve of the suspended players are expected back for Miami’s game next week against Georgia Tech. The other player, sophomore Anthony Reddick, was suspended indefinitely for using his helmet as a weapon during the fight.