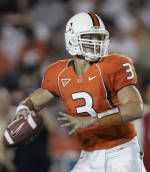 Blue Devils Up Next For Hurricanes

TV: The game will be broadcast live on ESPN 360 pay-per-view with Ron Brown (playby play) and Ryan Rose (analyst).

THIS WEEK’S GAME: Riding a three-game winning streak, the Miami Hurricanes will travel to Durham,N.C. to face the Duke Blue Devils at 1:00 p.m. Saturday. It is Miami’s first ACC road game of the seasonand the first of six straight conference games to close out the regular season.

The Hurricanes are 4-2, with consecutive victories over Houston, North Carolina and FloridaInternational. In last Saturday’s game against FIU, the Hurricanes won 35-0, getting their first shutoutin two years.

Duke is 0-6 this season and is coming off a 51-24 loss to Florida State.The Hurricanes are slowly improving week by week after starting off the season 1-2. Following theDuke game, important contests follow against Georgia Tech and Virginia Tech. Miami is 1-1 in the ACCCoastal Division, and all but one time in the division (Georgia Tech) has at least one loss, so an inviteto the ACC Championship game on December 3 in Jacksonville is still within reach. The Hurricanes willhave to face Duke without the services of 13 players who have been suspended for taking part in analtercation in the FIU game.

At the midpoint of the season, the Hurricanes rank fifth in the nation in total defense, sixth in scoringdefense, third in rushing defense and 43rd in passing defense. Offensively, Miami ranks 55th in rushing,63rd in passing, 63rd in scoring and 61st in total offense.

A HURRICANES VICTORY OVER THE BLUE DEVILS WOULD: Give them a 5-2 record and be theirfourth consecutive victory. It would give them a 2-1 record in the ACC and be their first victory awayfrom home since November 12, 2005 at Wake Forest.