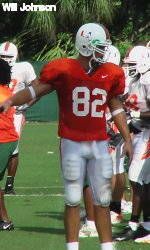 Hurricanes Ready Themselves For Duke

CORAL GABLES, Fla. – The Miami Hurricanes football team continued its preparation for Duke with a Wednesday afternoon workout at the Greentree Practice Fields.

“(Duke) creates some definite problems,” head coach Larry Coker said. “We have a lot of things we need to clean up from the blitz packages, and we’ll look at the tape tonight as a staff and sit as a team to try and iron things out tomorrow.”

While the team and coaching staff have moved past the fallout and media frenzy from the altercation in the FIU game, there is no moving past the fact that 13 Hurricanes will not be able to play in the game due to suspension and that starting linebacker Jon Beason (knee) is doubtful for the game. Those absences will leave holes that need to be filled by Hurricanes who will have increased roles on Saturday.

“We have good football players here,” Coker said. “We’re fortunate in a lot of areas and have some depth and we have some good defensive backs. We’re working Alex Pou and A.J. Trump on the offensive line. We’ve worked all year long on additional punters and kickers. We’re going to be fine.”

Tight end Greg Olsen, who sustained a concussion in last Saturday’s game, was held back in practice as a precautionary measure, but was much improved and will hopefully play on Saturday, Coker said.

Miami will return to practice on Thursday afternoon at the Greentree Practice Fields.