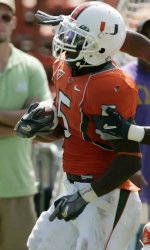 MIAMI (AP) -Javarris James had a 62-yard touchdown run for Miami’s longest play of the season, finishing with 111 yards to help the Hurricanes beat North Carolina 27-7 on Saturday.

Starting safety Lovon Ponder threw a touchdown pass to Sam Shields on a trick play and Charlie Jones had a 1-yard touchdown run for Miami (3-2, 1-1 Atlantic Coast Conference), which set a season high for points against a Division I-A opponent.

Kyle Wright completed 13 of 21 passes for 143 yards for Miami before sitting out the fourth quarter. Tight end Greg Olsen matched a career high with eight catches for 95 yards for the Hurricanes.

Ronnie McGill had a 2-yard touchdown run for North Carolina (1-4, 0-3), while quarterback Cam Sexton completed 9 of 28 passes for 136 yards and was intercepted twice – mistakes that led to 10 Miami points.

North Carolina beat Miami two seasons ago in Chapel Hill 31-28, then held a 16-7 halftime edge in its visit last season before falling at the Orange Bowl – but another upset bid never materialized.

James’ run was the deciding blow.

He burst through the right side of the line, then made a nifty move to avoid safety Cooter Arnold’s last-ditch tackle attempt inside the North Carolina 5 with 9:27 left in the third to give Miami a 24-7 lead. Since becoming Miami’s starter, James has 259 yards in two games.

Miami used some trickery to open the scoring.

One play after North Carolina – which has lost its four games to Division I-A foes by a combined 135-40 margin – punted only to its own 37 late in the first quarter, Ponder got the ball near the left sideline and got Tar Heels cornerback Quinton Person to bite on the play.

That freed Shields, who hauled in Ponder’s pass for an easy touchdown – the first caught by a Miami receiver all season. Jon Peattie made it 10-0 midway through the second quarter with a 39-yard field goal.

North Carolina got back into the game after two 15-yard Miami penalties. Brian Monroe’s kickoff after Peattie’s score went out of bounds, giving the Tar Heels the ball at their 35, and Baraka Atkins was flagged for a face mask after throwing Sexton to the turf.

Three plays later, Sexton hit Hakeem Nicks over the middle for 37 yards, giving North Carolina first-and-goal from the 2 – and McGill did the rest, plunging in to cut Miami’s lead to 10-7.

But that was the final highlight for the Tar Heels.

Sexton was intercepted by Miami’s Jon Beason with 1:29 left before halftime, and the Hurricanes went 56 yards in seven plays – with Jones’ 1-yard score restoring the 10-point margin.

After James’ long run, Peattie stretched the lead to 27-7 later in the third with a 40-yard field goal shortly after Sexton was intercepted by Miami’s Randy Phillips.