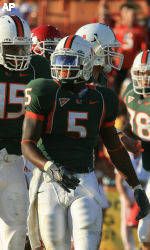 Win a pair of lower level tickets to UM vs. Boston College game and a parking pass. The winner will enter the stadium with the team and have on-field access prior to kickoff. Click here to enter!

James, who eclipsed Clinton Portis’ mark of 147 yards set against East Carolina in 1999, had a 1-yard touchdown run for the Hurricanes (2-2).

James Bryant, who asked to be moved from linebacker to H-back two weeks ago, caught a 2-yard scoring pass with 1:24 left in the third quarter for Miami, which avoided what would have been the program’s third 1-3 start in 30 years.

Kyle Wright completed 16 of 27 passes for 190 yards and the touchdown, but also threw two interceptions that led to 10 Houston points.

Wright kept the ball and converted a fourth-and-inches by the narrowest of margins with 2:36 left in the fourth to help seal the win.

Kevin Kolb was 18-of-28 for 196 yards for Houston (4-1), which came into the Orange Bowl averaging 38 points and 486 yards per game in its four victories. Kolb also had Houston’s lone touchdown on a 4-yard run.

The Cougars were seeking only the fourth 5-0 start in program history, and looked like they’d be getting it as they moved toward the end zone late in the third quarter with a 13-7 lead. But Houston running back Jackie Battle was hit by Miami’s Lovon Ponder at the Hurricanes’ 10, Chavez Grant recovered the fumble, and Miami dodged a huge bullet.

Wright then made two big plays to ensure that Miami would capitalize; he found Lance Leggett for a 27-yard gain on third-and-24 from the Houston 29, then tossed the short pass to Bryant for the clinching score.

Miami took the opening kickoff and easily carved through Houston’s defense, with James getting the call on six of seven plays in an 80-yard drive. Wright found Leggett for a 45-yard gain to give Miami first-and-goal from the 4, and James ran in two plays later for a quick 7-0 lead.

The Hurricanes were driving on their next possession, too, before problems began.

Wright’s down-the-middle pass was intercepted by Will Gulley at the Houston 16, and the Cougars went on a 12-play drive capped by Kolb’s 4-yard run early in the second quarter to tie the game.

Miami’s ensuing drive lasted two plays before Wright threw another interception; his high pass bounced off tight end Greg Olsen’s hands and into the arms of Houston linebacker Wade Koehl. That set up a 38-yard field goal by Ben Bell, putting the Cougars up 10-7.

Another Bell field goal, this one from 35 yards, capped the first drive of the second half and extended Houston’s edge to 13-7. But the Cougars couldn’t hang on from there.