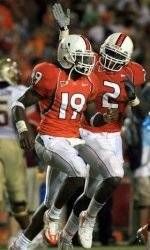 Hurricanes Can't Get On Track Against Seminoles, Fall 13-10

Win a pair of lower level tickets to UM vs. Boston College game and a parking pass. The winner will enter the stadium with the team and have on-field access prior to kickoff. Click here to enter!

MIAMI (AP) – Gary Cismesia took his final warmup kick on the sideline, rubbed his head, fastened his helmet strap and jogged onto the field. He looked cool and calm, then did what so many Florida State kickers over the years could not.

It was the second straight win in the series for the Seminoles, who also eked out a three-point win over their Sunshine State rival in last season’s opener.

Drew Weatherford, who was awful in the 2005 win, was solid this time – throwing for 175 yards, 62 of them on a pair of pivotal third-down conversions that set up the Seminoles’ lone touchdown early in the fourth quarter. And Florida State’s hopes almost entirely hinged on the passing game, since Miami’s defensive front held the Seminoles to 1 yard on 25 rushes.

Still, even a performance like that wasn’t enough to carry the Hurricanes, who managed only 17 yards in the second half and wasted a 10-3 halftime lead.

“You don’t know how hard it is to beat Miami,” Seminoles coach Bobby Bowden said. “I mean, I’ve been playing these guys for 31 years. They’ve probably got as good a defense as there is in the country, unless it’s us.”

Charlie Jones had a 4-yard touchdown run for Miami, which hadn’t lost to Florida State in the Orange Bowl since 1998 – and has now lost three of its last four games overall dating back to last season. The revamped Hurricane offense struggled mightily; Wright was 18-of-27 passing, but gained only 132 yards.

And the rushing game, like Florida State’s, was nonexistent: Miami had 2 yards on 26 carries, the second-lowest total in school history.

“What you saw tonight was a typical Miami-Florida State game. … I want to make sure our fans don’t give up on this football team,” Miami coach Larry Coker said. “This is going to be a very good football team. It’s a long season.”

Joe Surratt had a 1-yard touchdown plunge for Florida State on the first play of the final quarter, and De’Cody Fagg had three catches for 60 yards for the Seminoles.

Darnell Jenkins and Lance Leggett each had four catches and combined for 93 yards for the Hurricanes, but the duo made only one catch in the second half.

With one swing of Cismesia’s right leg, finally, Gerry Thomas, Dan Mowrey, Matt Munyon and Xavier Beitia could enjoy seeing a late-game kick against the Hurricanes. Each of Florida State’s former kickers had missed pivotal chances late in games against Miami in recent years, a trend that has long befuddled the Seminoles.

And Beitia missed three in his career against Miami – wide left at the end of the 2002 game, another in the 2004 Orange Bowl loss to Miami, then a block in the Hurricanes’ 16-10 win that opened the 2004 season.

But Cismesia – who missed an extra point and then two field goals in overtime against Penn State last season in the Orange Bowl – finally delivered a dagger.

Without Weatherford’s clutch play in the third quarter, Cismesia may never have gotten his chance.

Weatherford – now 2-0 against Miami as a starter – had third-down passes of 28 and 34 yards to breathe life into a stagnant Florida State offense, setting up Surratt’s score that pulled the Seminoles into a 10-10 tie.

A close game shouldn’t have surprised anyone at the Orange Bowl – this marked the seventh time in the last eight meetings between the schools that the outcome was decided by eight points or less.

Cismesia hit a 37-yard field goal 6:04 into the game, opening the scoring.

Miami’s first scoring drive was highlighted by a 27-yard catch by Jenkins, who adjusted and spun to grab a slightly underthrown ball shortly before Jones’ touchdown run with 13:02 left in the half.

Jon Peattie added a 20-yard field goal later in the half, pushing the margin to 10-3. Miami’s Brandon Meriweather had an interception shortly before halftime, giving the Hurricanes the ball at Florida State’s 31 – but the offense couldn’t extend the lead, and that missed opportunity proved costly.

Notes: Bowden is now 1-8 against Miami when trailing at halftime. … Dwyane Wade, Udonis Haslem and Dorell Wright of the NBA champion Miami Heat watched from the Miami sideline. … Miami punter Brian Monroe had a career-long 68-yard kick in the first quarter.