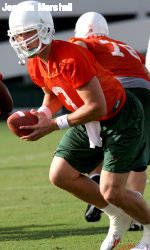 Hurricanes Go Back To Work

Coral Gables – A day off from practice on Sunday gave the Miami coaches a chance to review film of Saturday’s scrimmage and allowed the players to recharge their bodies on Monday. Despite inclement morning weather costing Miami its first practice of the preseason in the morning, the team was able to conduct steamy afternoon workout at the Greentree Practice Fields.

“We had a day off yesterday and a lot of guys back healthy, which is good,” head coach Larry Coker said. “It won’t be long until the players will be in classes and we won’t have many options or flexibility when we have class. It will be time to really zero in on Florida State very soon.”

Before the team can hone completely in on Florida State, it has to iron out its own kinks. Review of Saturday’s scrimmage tape allowed Coker and his staff to identify areas for improvement.

“The quarterbacks did a lot of good things, as far as decision-making and those type of things,” Coker said. “When you have the (pass) drops, it really kills your continuity. Defensively, we tackled awfully well and I was very encouraged by that.”

Tuesday Night LightsMiami will hold its first practice open to the public at the Orange Bowl at 7:00 p.m. Tuesday. While the practice will give fans a first glimpse of the 2006 Hurricanes, it will give the team its first glimpse of the new Orange Bowl lights. “The main thing I want to get accomplished is field punts and kickoffs, and pass and catch under the lights in the Orange Bowl,” Coker said. “We haven’t been there and it’s a new lighting system. I think It’s up and running and good. We need to practice.”

The Word On ByrdRight tackle Tyrone Byrd is still a little banged up but should be fine, Coker said. “He’s not going to have surgery and his knee is OK,” Coker said. “His knee still needs some rehabilitation on it. He’s not ready to play today. He’s working and doing some practice work, but he’s not 100 percent. We have Chris Rutledge there, and Cyrim Wimbs has played there. We’ve moved some guys around, but I think we’re going to be fine there. We’re going to need to get Tyrone back healthy.”