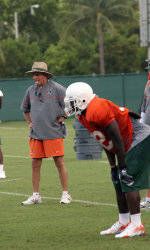 Coral Gables – Miami worked on their red zone packages in the morning and put the focus on picking up blitzes in the afternoon to complete the Hurricanes’ third double session of the preseason on Thursday at the Greentree Practice Fields. While not dominant, UM’s offense took plenty of steps in the right direction.

“We had a good day today,” head coach Larry Coker said. “There was some good contact and we saw some really good things out of our offense today. Guys were running around and making plays. It’s getting better and better.”

Both the offense and defense had their moments during the morning practice, in fully-padded goal-line and short-yardage situations.

“We really needed that,” Coker said. “It’s hard to do that as a head coach because we had a lot of bodies pile up and it’s always a concern. But the guys handled it well. As a head coach, you like it because you saw some success on both sides of the ball.”

Coker also revealed the offense’s red zone commitment for 2006. “We’re going to score,” Coker said. “We’ll have some new things down there. We feel like we have to mix in the run game and the pass game. There will definitely be some new concepts. The main thing is that those players have to make plays. We have to protect for this quarterback, run the concepts, get open and make plays.”

Miami’s success in the red zone will be partially contingent on the play of quarterback Kyle Wright, who has been doing very well in camp, Coker said.

“Kyle is running the offense and using the receivers more, much like Ken Dorsey did. He’s doing a good job of spreading the ball around more.”

Wright confirmed that he has been hitting multiple targets and that Thursday’s practices were the offense’s best of the preseason. “We looked really sharp today,” Wright said of the offense. “We made some checks vs. blitzes and converted on it in third-down situations.”

The Hurricanes return to the Greentree Practice Fields at 8:20 a.m. Friday.