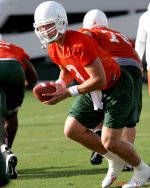 CORAL GABLES, Fla. (www.hurricanesports.com) – Head coach Larry Coker rounded his team up after the morning stretch at the Greentree Practice Fields on Wednesday and delivered a speech just before the team broke for practice. Although only the team and Coker’s staff know exactly what was said, the performance in practice should give a good indication of what the transcript would say.

“I’m very, very pleased with today,” Coker said. “We had some nice plays on offense and defense. I think we’re starting to do some things better as a team. Now we have to do those things every day and get better with it.”

The Hurricane offense, which had been slightly trailing the defense for most of training camp, picked up the pace on Wednesday.

“The pass protection was outstanding today and guys were throwing and catching the ball much better than yesterday against a good defensive team,” Coker said. “I really like that. (Running back) Andrew Johnson really ran the ball well today and I was encouraged by that.”

Without revealing specifics, Coker conceded the jist of his pre-practice speech, but left further motivational inspirations squarely on the shoulders of his players.

“I was firing them up,” Coker said of his pre-practice meeting. “The magic words tend to wear off when you get hit in the mouth and the humidity is about 95 percent. My magic words don’t last very long. They better fire themselves up.”

The Hurricanes might need that motivation for their third double-session of the preseason at the Greentree Practice Fields on Thursday.

Trump Booted UpRedshirt freshman A.J. Trump, who as earned praise from teammates and coaches alike during preseason camp, wore a protective boot and sat out of Wednesday’s practice. “He has a sprained ankle and we just want to get him well,” Coker said. “He wants to practice and fight through it, and he has been. But we can’t continue to have him hobbled.”

Pata Making The TransitionSenior Bryan Pata, who made the move from defensive end to defensive tackle at the start of camp, has been adjusting well. “That’s been a great transition for (Pata) and for our football team,” Coker said. “He’s adapted well and is doing a great job with it. He’s played there a little bit. Now he’s playing there and getting coached. That’s a position for him.”

Still SharpeDespite two major knee surgeries, Coker still believes junior cornerback Glenn Sharpe still has what it takes to be a marquis player at his position. “From what I’ve seen, he has great speed. The speed is still there. I don’t see any reason why he can’t do what he’s done before.”