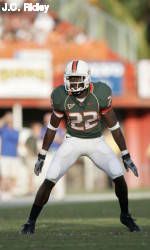 Coral Gables – The University of Miami’s Kelly Jennings was selected with the 31st choice in the first round of Saturday’s NFL draft, extending the school record streak to 12 consecutive years in which a Hurricanes player has been chosen in the first round.

“It’s a badge of honor. It is pretty special,” said UM head coach Larry Coker. “I am very excited that the streak has continued. The streak is nice, but I’m really excited for Kelly Jennings.”