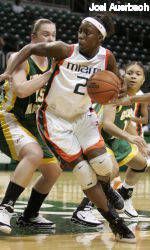 <?xml:namespace prefix=”st1″ ns=”urn:schemas-microsoft-com:office:smarttags”?>Miami will participate in the Women’s National Invitation Tournament (WNIT) for the fourth time in school history Saturday, hosting cross-town rival FIU in a first-round match-up at the BankUnitedCenter at 7 p.m.

First-year head coach Katie Meier and the Hurricanes received a preliminary round bye at the 2006 WNIT behind an overall record of 16-12 and a 6-8, sixth-place finish in the ACC final regular season standings.

Senior Melissa Knight is shooting 61.5 percent from beyond the arc over the last three games. Knight has hit 47 three-pointers this season which marks the seventh-highest single season total in UM history.

Sophomore Lamese James has been one of UM’s most productive players of late, averaging 11.0 points and 8.0 rebounds over the last two games.

After knocking off Cincinnati 81-75 Thursday in overtime in the WNIT preliminary round, head coach Cindy Russo and the Golden Panthers head into Saturday’s game with an overall record of 19-12.

Junior center Lasma Jekabsone, a First Team All-Sun Belt selection, is averaging a double-double on the season, posting a team-high 15.3 points and 10.3 rebounds per game. Senior guard Faeza Bouderra is second on the team in scoring with 11.4 points per game.

The Series vs. FIU

The Hurricanes and Golden Panthers will meet for the second time this season and the 52nd time overall Saturday night. Miami has squared off with FIU more times than any other opponent and, with a 75-63 win Dec. 6 in Coral Gables, currently holds a 31-20 advantage in the all-time series. FIU has won four of the last six meetings dating back to the 2000-01 season, but have lost each of their last two games at Miami and are 9-21 all-time in Coral Gables.

In the last meeting, UM held the Golden Panthers without a field goal in game’s final four minutes, putting together a game-ending 12-0 run en route to a 75-63 victory at the BankUnited Center. Tamara James posted a double-double, finishing with 13 points and 14 rebounds. James’ double-double came the hard way as she recorded 11 rebounds and all 13 points in the second half alone.

Miami at the WNIT

Miami is making its fourth appearance at the Women’s National Invitation Tournament this season. UM holds a 2-4 all-time record at the WNIT.

The Hurricanes last made the WNIT in 2002. At the 2002 WNIT, UM downed Georgia Tech 73-64 in the first round in Atlanta before falling 83-76 in the second round on the road against Houston.

The Hurricanes first berth at the WNIT was in 1990. That season, Miami fell in the semifinals to eventual tournament champion Kentucky 80-68 in Amarillo, Texas. UM would finish fourth in the tournament after falling 82-80 to Charlotte in the consolation game.

Miami also advanced to the WNIT in 1999.

Dating back to 2003 when she was the head coach at Charlotte, head coach Katie Meier will make her fourth-consecutive postseason appearance at the 2006 WNIT. She owns a 1-2 record in the WNIT and a 0-1 record at the NCAA Tournament.

Meier led the 49ers to three postseason berths – one NCAA Tournament appearance (2003) and two WNIT appearances (2004, 2005) – during her four-year tenure at Charlotte.

Her longest run at the WNIT came in 2004 when the 49ers advanced to the second round where they fell on the road to Western Michigan 85-83 in overtime.

Tickets are just $7 dollars for adults and $5 dollars for all UM employees, senior citizens and children. For ticket information visit the Hurricane Ticket Office online at hurricanesports.com or call 1-800-GO-CANES.