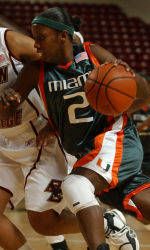 Hurricanes Come Up Short in 68-61 loss at FSU

TALLAHASSEE, Fla. – Senior forward Tamara James’ 20 points was not enough as Miami gave up 27 points on 25 turnovers to fall to Florida State 68-61 Friday night at the Donald L. Tucker Center.

Coming out of the half, Florida State put together a 13-2 early second-half run to take a 52-40 lead. The Seminoles maintained at least a 10-point lead for a large portion of the second half, holding the Hurricanes without a field goal from the 11:47 mark to the 5:57 mark.

Miami battled back to cut the lead to six at 58-52 until FSU’s Mara Freshour’s three-pointer put the Seminoles back up 61-52 with just over two minutes remaining.

Renee Taylor, who finished with 14 points, hit a floater in the lane to bring UM back within 61-56 with 57 seconds, but the Hurricanes could close the gap any tighter, eventually falling 68-61.

James finished with five steals and, along with Albrey Grimsley, recorded a team-high seven rebounds.

The Hurricanes return to action Sunday, hosting No. 1 Duke at the