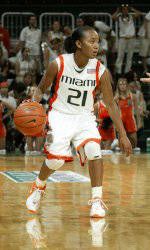 Following a free throw by sophomore forward Lamese James, who finished with seven points and a team-high six rebounds, Miami battled back to cut the lead down to 14 at 56-42 with 10:47 left to play.

FSU answered Miami’s run, outscoring the Hurricanes 18-3 over the next six minutes to hold off the UM charge and eventually went on to take the 79-54 victory.

All but one of FSU’s starting lineup hit double-digits including Holly Johnson and Ganiyat Adeduntan, who each recorded 16.

The Hurricanes return to action Sunday, traveling to Chestnut Hill, Mass. to take on No. 21 Boston College at 2 p.m.