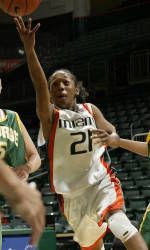 Miami Comes Up Short on the Road Against NC State

NC State’s run ended when Taylor hit a pair of three-pointers on back-to-back possession to bring UM back within three at the 11:23 mark.

Following a three by NC State’s Monica Pope, Taylor brought UM back within three once again, converting a three-point play and minutes later, sophomore guard Albrey Grimsley cut the NC State lead to 61-60 on a layup with seven minutes remaining.

NC State outscored the Hurricanes 20-12 over the next six minutes, taking a nine point, 81-72, lead with just under a minute left to play.

The Hurricanes battled and cut the lead down to 82-77 on a Tamara James three-pointer with 28 seconds remaining, but could not answer again missing a pair of shots in the closing seconds to fall 83-77.

Miami, after trailing by as much eight, bounced back to hold a three-point, 40-37 lead at the half. Taylor helped the UM halftime advantage, scoring 15 on 6-of-8 shooting, including baskets on three-straight possessions.

Taylor hit 10-of-15 from the field while recording the second-highest UM single game three-point percentage on 83.3 percent from beyond the arc. Her three-point mark ties her with teammate Melissa Knight’s similar performance against Clemson this season.

James finished with 21 points on the night and a team-high seven rebounds.

The Hurricanes return to action Sunday afternoon, hosting ACC rival Virginia Tech in a televised game on ESPNU at 3 p.m.