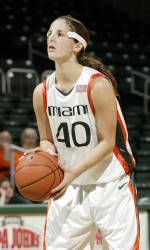 A Quick Look at Virginia Head coach Debbie Ryan and the Cavaliers are 12-4 overall and 2-3 in ACC play this season. Virginia’s success this season has come from their defensive efforts which allow just 54.2 points per game while forcing 12.31 steals per contest – both of which rank third in the league.

The Series Sunday’s game will mark just the third meeting between the Hurricanes and Cavaliers. The two teams have split the two previous meetings. Miami won the last contest, a 66-60 decision in Charlottesville on Feb. 10 last season.

Game PromotionsMiami Hurricane women’s basketball fans will have the opportunity to collect player trading cards during all home games. The first 200 fans in attendance at each game will receive the cards, which will feature a different player each game during the 2005-06 including Sunday with senior guard Katie Hayek.Tickets Tickets are just $5 dollars for adults and $3 dollars for children and senior citizens. To purchase tickets or for more information please call the Hurricane Ticket Office at 1-800-GO-CANES or PURCHASE ONLINE at hurricanesports.com.