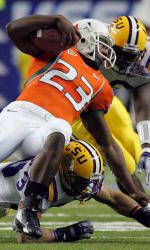 Flynn spearheaded a 17-point outburst in the second quarter with touchdown passes of 51 yards to Craig Davis and four yards to running back Joseph Addai that gave the Tigers (11-2) an 20-3 advantage at the break. He completed 13-of-22 passes for 196 yards without a turnover.

With Flynn directing the offense, LSU rolled up 301 yards in the first half.

The Hurricanes (9-3) suffered their worst bowl loss in their illustrious history, surpassing a 29-0 defeat to Arizona in the Fiesta Bowl in 1994.

On Miami’s first possession, Devon Hester lined up at tailback and receiver and also took a direct snap at quarterback. Hester had two catches for 40 yards and six carries for 24 yards.

Hester had a 24-yard run on the possession to set up a field goal. But overall, the junior and the Hurricanes were contained.

Jon Peattie kicked a 21-yard field goal to open the scoring in the first quarter for Miami, which lost just its second bowl in its last nine contests.