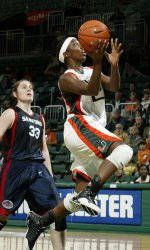 CORAL GABLES, Fla. – Forcing 25 turnovers with 16 steals, the University of Miami women’s basketball team limited Hartford’s scoring opportunities while shooting a season-high 54.8 percent from the field to down the Hawks, 82-62, Saturday evening at the BankUnited Center.

Led by senior forward Tamara James’ 22 points and eight rebounds, the Hurricanes (7-1) hit 34-of-62 shots from the field to upend the Hawks (5-2), marking just the fourth time in history a UM team has started off a season with at least seven wins in eight games.

Miami and Hartford traded baskets early in a first half that saw the lead change eight times in the first seven minutes.

Down by nine with 5:22 remaining in the first half, Hartford scored five unanswered points to cut the UM lead to four at 37-33 with 4:27 showing. Miami answered, holding the Hawks without a field goal for the remainder of the half while piecing together a 13-1 run to take a 50-34 lead into the break.

Making the first start of her career, freshman center Brittany Denson nearly recorded a double-double with nine points and eight rebounds. Denson’s classmate, guard LaToya Cunningham turned in a career-high off the bench with 14 points, 12 of which came in the first half, and added five rebounds while junior guard Renee Taylor also posted 14 points on the night.

The Hurricanes take a short break next week before hitting the road for the first time this season, traveling to Montana Friday to take on the Grizzles at 9 p.m. (EST)