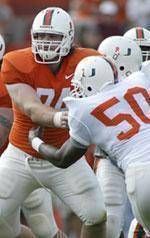 CORAL GABLES, Fla. – The 10th-ranked University of Miami football team has their sights set frontward as they look to cap their regular season with a positive note this Saturday when they take on Virginia (6-4, 3-4 ACC) in the Orange Bowl.

All indications from coach Larry Coker after Tuesday’s practice at the Greentree Practice fields point in that direction, despite coming off a tough 14-10 loss to ACC foe Georgia Tech last Saturday. Coker was pleased with the enthusiasm at practice and thinks his team improved itself in all facets.

“This was a much, much better practice than we had a week ago,” Coker said. “There was a lot of energy today, defense, offense-we got better as a football team today. We got better in special teams today, and I’m really encouraged and I like what I see.

“I told the players I think the thing is to do whatever you need to do to get better as a player.”

The Hurricanes (8-2, 5-2 ACC), who are ranked ninth in the latest BCS standings, will honor their senior class before the game, which is set to kickoff at 3:30 p.m. The game will be televised regionally by ABC.

Notes: DE Thomas Carroll “was held out of most contact today, but he seems to be doing fine.”… Cornerback and return specialist Devin Hester (hamstring) practiced some Tuesday and his status is still uncertain for Saturday’s game. “He did some things today,” Coker said. “He’s still a little slow. I don’t know how much he’ll be able to do Saturday, but he definitely was back and in full gear today.”… Linebacker Willie Williams (hamstring) is questionable, Coker said. Linebackers Romeo Davis and Eric Houston, among others, have been called upon to replace Williams in kickoff coverage …Cornerback Kelly Jennings (shoulder) practiced and is “doing fine,” Coker said.