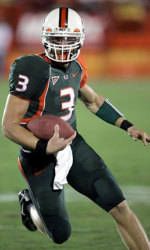 The Yellow Jackets blitzed on virtually every play to stymie Wright. After throwing touchdown passes to five receivers a week ago against Wake Forest, he managed only one scoring pass and went 14-for-31 for 207 yards.

KaMichael Hall sacked Wright twice and made a fourth-down stop to end a Miami threat midway through the fourth quarter. Wright moved the Hurricanes 62 yards to the Georgia Tech 27 with 1:46 left before he was intercepted by Dennis Davis, and the Yellow Jackets ran out the clock.

The Hurricanes (8-2, 5-2 Atlantic Coast Conference) lost for the first time since their season opener at Florida State.

Georgia Tech mounted touchdown marches of 68 and 61 yards against the nation’s No. 1-ranked defense, and Miami penalties contributed to both drives.

Interference on Marcus Maxey negated an interception in the end zone three plays before Tashard Choice scored the game’s first points on a 2-yard touchdown run. A penalty for excessive celebration led to the Yellow Jackets’ other score on a 16-yard keeper by Reggie Ball.

Ball went only 11-for-30 for 159 yards, but in key situations he repeatedly found Calvin Johnson, who had six receptions for 89 yards.