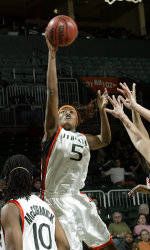 After having a 17-point lead cut to seven by the Bulldogs (0-1) at 47-40 with 5:47 remaining, the Hurricanes (1-0) responded with an impressive 14-4 run. Senior guard Melissa Knight, who returned to the court after missing the entire 2004-05 season with an ACL injury, sparked the Miami run with a three-pointer as part of her 14 points.

Senior forward Tamara James led all scorers with 17 points – one of four UM players to score in double figures – while pulling in eight rebounds. James scored 11 points in the first half to move into third place all-time in scoring with 1,778 career points at UM, surpassing former Hurricane Jeanie Hebert’s mark of 1,776.

Miami trailed 4-1 in the game’s opening minutes, but knotted the score at four-all on a three by senior guard Katie Hayek just under three minutes into the game. Miami took the lead on their next possession and would not trail the rest of the game.

The Hurricanes more than doubled Samford’s point total in the first half, taking a 35-17 lead into the locker room, scoring 21 points off Bulldog turnovers.

Despite Samford doubling their scoring output in the second half with 34 points, the Hurricanes pulled away for the 72-51 victory after fending off the late Bulldog surge.

Junior center Imani Dhahbu pulled in a career-tying 12 rebounds, including 10 in the second half, and scored 10 points in the second double-double of her career and junior college transfer Renee Taylor turned in 14 points in her first game as a Hurricane.

Samford’s Alex Munday and MaKenzie Spruiell each scored 14 points, combining for 55 percent of the Bulldog’s 51 points.

The Hurricanes return to action next Friday, hosting Bradley in the opening day of the UM Thanksgiving Tournament at the BankUnited Center at 7 p.m.