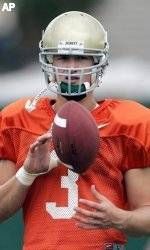 Miami Rolls On Despite Postponement

CORAL GABLES, Fla. – The sixth-ranked University of Miami football team doesn’t have a game this weekend because of Hurricane Wilma, but game preparation hasn’t ceased. Miami shifted focus from Georgia Tech to its next opponent, North Carolina, in a workout at the Greentree Practice Fields Thursday afternoon.

“This was a teaching day today,” head coach Larry Coker said. “There was a lot of learning and a little conditioning, and we tried to get guys healthy and back on the field.”

UM’s plans to play Georgia Tech on Saturday at the Orange Bowl were disrupted by the threat of Hurricane Wilma and the game was postponed until Nov. 19. The postponement moved North Carolina, the team Miami will play on Oct. 29 in the Orange Bowl, up on the preparation list.

“Obviously our routine has been broken up,” Coker said. “We’re going to try to make the most of it and try to get some preparation done for North Carolina.”

The sudden shift in focus from Georgia Tech to North Carolina can be challenging, but the Hurricanes have been able to adjust. “It can be difficult,” Coker said. “That’s why we didn’t go directly into preparing for North Carolina yesterday. We practiced us against us. Guys have made the shift. We already have North Carolina info on the board and what North Carolina tape we have, we’re looking at that. We’re moving forward.”

No game does not mean no practice for the Hurricanes. UM will be on the Greentree Practice Fields Friday afternoon and Saturday morning, Coker said. Hurricane Wilma is expected to sweep across the Miami-Dade area on Sunday afternoon.