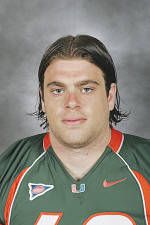 Coral Gables, Fla. (www. hurricanesports.com) – – Miami Hurricanes offensive tackle Eric Winston has been selected as a semifinalist for the Rotary Lombardi Award, presented by Wachovia Bank. Winston, a fourth-year senior, is one of 12 semifinalists for the award, which honors the top lineman in college football. It will be presented on December 7 in Houston.

The Rotary Club of Houston has presented the Lombardi Award – named for Green Bay Packers coaching great Vince Lombardi – since 1970.

If Winston were to receive the award, he would join Warren Sapp (1994) as the only Miami winners of the award.