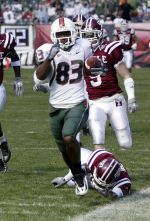 Wright threw four touchdown passes in the first 19 minutes, leading No. 7 Miami to a 34-3 victory over woeful Temple on Saturday. It was the Owls’ first game since coach Bobby Wallace said he will leave at the end of the year.

The Hurricanes (5-1) completely outclassed Temple (0-7), jumping out to a 27-0 lead in the first quarter. But Miami’s backups dampened the team’s mood by getting shut out in the second half.

“We were very efficient with our ones,” Miami coach Larry Coker said. “I was happy with that. The game was under control in the first quarter. I would’ve liked to finish better. We played a lot with our second and third team. When they get an opportunity, they have to perform. They’re one play away from being starters. It wasn’t a real joyous dressing room.”

Wright sprained his right thumb on his final play. X-rays were negative and he doesn’t expect to miss any time. Wright completed 9-of-10 passes for 196 yards, before giving way to Kirby Freeman late in the second quarter.

“We executed what we wanted to do,” Wright said. “It was definitely a successful day for the offense.”

Sinorice Moss had three catches for 122 yards, including a 92-yard TD pass on Miami’s second offensive play. Devin Hester returned a punt 48 yards for a TD.

Since surviving a triple-overtime test at Clemson in the season’s second week, the Hurricanes have won their last four games by a combined 136-20 margin.

Temple, which will join the Mid-American Conference for the 2007 season, has been outscored 331-66 in its first season since being kicked out of the Big East.

Earlier this week, Wallace announced that he would leave when his contract expires at the end of the season. He never won more than four games in his first eight seasons, and could finish out his tenure with the school’s first winless season on the field since 1959 – the Owls forfeited six wins in 1986 due to the use of ineligible players. Temple’s four remaining games include trips to Clemson, Virginia and Navy, and one home game against Miami (Ohio).

“I give our kids credit for fighting hard,” Wallace said. “We had some good practices this week.”

The Hurricanes went ahead 7-0 after Moss caught a swing pass from Wright and sprinted down the left sideline for a 92-yard score, the second-longest touchdown pass in school history. Gino Torretta threw a 99-yard TD pass to Horace Copeland in a game against Arkansas in 1991.

“It was a run play and Kyle checked off. He gave me a hand signal,” Moss said. “The cornerback was playing off. It was exciting.”

After a 5-yard punt by Mike McLaughlin gave Miami the ball at Temple’s 34, Wright connected with Greg Olsen on a 21-yard TD pass to make it 13-0. Jon Peattie missed the extra point, snapping a string of 131 successful conversions for Miami dating to 2002.

McLaughlin’s next punt traveled 31 yards, but Hester took it 48 yards to the end zone for his fourth career punt return for a TD. Hester caught the ball and started to his right, stopped and went back to his left, eluded a tackler, turned around and sprinted down the right sideline.

Wright threw an 8-yard TD pass to Olsen and a 20-yard scoring strike to Ryan Moore to put Miami ahead 34-0.

Ryan Lux missed a 53-yard field goal wide right for Temple, but connected on a 40-yarder minutes later for the Owls’ only score with 1:01 left in the first half.

The announced crowd of 23,129 for homecoming was Temple’s largest of the season, though there were more orange shirts than cherry and white ones at Lincoln Financial Field – home of the Philadelphia Eagles.