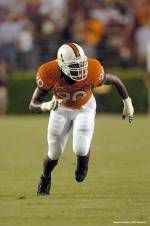 Hurricanes Ready To Head To Philly For Temple Game

CORAL GABLES, Fla. – The seventh-ranked University of Miami football team (4-1) completed its practice week for its game against Temple (0-6) at the Greentree Practice Fields on Thursday afternoon. UM will look to win its fifth-straight game of the season and keep head coach Larry Coker’s record against non-conference foes perfect on the road at 1 p.m. on Saturday.

Thursday’s practice wrapped up a solid week of practice for UM. “It was a pretty crisp day today,” Coker said. “I thought the guys moved around well and I thought we had an excellent day. The guys look quick and we need everyone to get rested and get ready to have a great day on Saturday.”

UM’s last four Saturdays have resulted in four wins. The defense was strong throughout the recent three-game home stand, allowing a combined 17 points in that time and Miami’s offense broke through with a 52-point effort against Duke last week. All signs point to continued improvement, and there have been no indications of the Hurricanes taking the Owls’ winless record lightly.

“I think mentally, we’re into it,” Coker said. “I think the guys want to improve and get better. I like what I saw today.”

Several UM players will be playing in their home state or within driving distance of their hometowns, a fact not lost on Coker. “We definitely try to take those guys and give those guys an opportunity to play,” Coker said. “There is always more motivation for a player when a lot of family is at the game. You love to be able to take those players.”

UM departs from the Hecht Athletic Center on Friday afternoon for Philadelphia. The game will be televised nationally on by FoxSports Net.